Are cell phones increasing rates of Hospital-Acquired Infections (HAIs) in South Africa? An article in the SA Medical Journal suggests that cell phones in hospitals are a danger to your health!

We need more research into whether cell phone usage by healthcare providers in hospitals is causing Hospital-Acquired Infections (HAIs) in South Africa.

This is according to Graham Anderson, CEO and Principal Officer of Profmed. Anderson has called on both private and public sector hospitals to implement systems and dedicated teams to monitor HAIs.

HAIs are defined as infections that are acquired by patients while hospitalised that was incurred after they were admitted.

“South Africa has no national standardised surveillance system for HAIs. The situation makes it difficult to assess the prevalence of the issue in the country and develop necessary strategies to combat it,” Anderson says.

Anderson says that while mobile technology holds major potential within healthcare, more research needs to be done. Particularly researchers must found out whether the use of such devices is contributing to rates of HAIs. 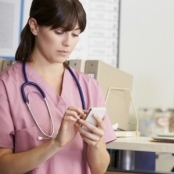 “Healthcare institutions are associated with cure, but they also need to focus on preventative health measures,” says Anderson, “This highlights why hospitals urgently need data to develop informed guidelines on mobile phone usage by healthcare providers in order to prevent HAIs.”

A research report into the link between cellphone usage and HAIs in South Africa appeared in the Southern African Journal of Infectious Diseases in May 2016. However, the authors of the study admit that their sample size was small.

The tested sampled 100 cell phones in the research. The researchers found that thirty had bacterial contamination.

The study noted that, “This is lower than the prevalence found in other studies, but still of concern in view of the possible risk factor for the spread of infection”.

There is little available data on the prevalence of HAIs because surveillance of these infections is “neglected and poorly resourced”.  This is the view expressed in another research paper published in the South African Medical Journal in May 2016.

“Ultimately, unless we understand the burden of HAIs there is little we can do about them. Currently, very few SA healthcare facilities understand their own HAI burden at a sufficiently detailed level,” the paper says.

Anderson says a contributing factor behind a lack of resources in HAI surveillance is the fact that this type of system requires significant investment from hospitals.

“The existing research shows, however, that a better understanding of HAIs provides huge benefits through more targeted interventions and efficient use of resources.”

Anderson concludes, “All hospitals should be investing in research and ongoing educational programmes around HAIs. The educational programmes should include the use of mobile phones by healthcare employees during work hours. Such investment could significantly assist in preventing HAIs.  A scenario like this would decrease in the burdens our hospitals are under in South Africa.”