C-Section or Natural Birth? The Choice is YOURS

Caesarean section is considered major surgery and can mean excess bleeding, infection and damage to organs. Having said that, in some cases, a caeasarean delivery can be life-saving for both the mother and the baby. Figures released recently by the Council for Medical Schemes show that in one year more than 70% of mothers on a medical aid gave birth by means of a C-section. 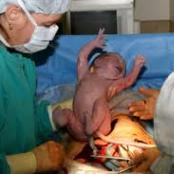 events such as holidays and golf days and not allow a birth to interfere with their pleasures. It would seem many women actually want natural birth but feel as though they are being pushed into surgical birth that they don’t want.

Caesarean Section or Natural Birth – Caesareans Frowned Upon by other Countries

Professor Theron from Stellenbosch has said that South Africa’s very high percentage of caesarean births is a scourge to the country and that the rates are frowned on by the Nordic countries as well as the UK and Belguim. These countries are known for their low maternal and perinatal deaths, and groups such as the American Congress of Obstetricians and Gynaecologists advocate for fewer C-sections.

The Times reader, Lucio Carazzo even suggested that there are some doctors who prefer their patients to have C-sections so that they can make more money. Gynaecologists claim that their insurance premiums are just eating up all their money, saying fees are in the region of R23,000 a month.

One aspect that contributes towards the rise in Caesarean deliveries is medical malpractice litigation and this is not only in South Africa but world-wide. Peter De Jong, a Cape Town gynaecologist claims that ‘a Caesarean section is what lawyers perceive to be the best standard. If a patient sues after a birth gone wrong, a gynaecologist needs to show the court, they did everything they could and a Caesarean is seen as everything the doctor could have done’.

Gynaecologist Dr Peter Koll said that when it comes to decisions to be made about whether to go the natural route or whether to opt for a caesarean, there is no straightforward answer. He said the reason for this is that research statistics are adapted to suit so that doctors themselves don’t know what is really better. He went on to say that they want to see research results where elective caesarean births were compared to natural births, and that the public should demand answers that were accurate and true.

The fact remains that there are benefits to both natural- and ceasarean birth. Dr Peter De Jong went on to say that an advantage which was gaining prominence with natural births is the fact that the baby is exposed to micro biome – bacteria from the mother’s vagina – which could be colonising the infant’s gut, helping with digestion and development of the immune system. He went on to say that they were still at the beginning of research.

Caesarean sections on the other hand, according to research could also prevent a women from having bladder problems decades after the birth, and which would require the possibility of surgery. .

Doctor Peter Koll said that the patient should be free to make up their own minds as to what kind of birth they wanted. He said that he didn’t think natural births were safer than Caesarean sections, pointing out that natural births led to more court cases.

Caesarean Section or Natural Birth – There IS a Solution

Women the world over and particularly in South Africa have a very easy solution to this dilemma. The secret is to do thorough research on both options and then to simply insist on having that specific birth for the health of both the mother and the baby.